Well, I have been waiting for it and I know probably most of you have.  The Nikon D800/D800E have been announced.  See the official press release here: Nikon.com D800/800E Press Release.  At 36MP it is the highest resolution Full Frame Camera.  The difference between the 800 and the 800E is the 800E has the anti-aliasing filter removed which gives better sharpness but also gives the problem of moiré patterns and color variation.  I would save $300 and stick with the normal D800.  Now this camera was obviously pushed to compete with the Canon 5D Mark II and the upcoming Mark III version of the camera in the HD-SLR market.  And with that one thing cool for us Chicago folk, is the promo movie was filmed here in Chicago, check it out:

One thing with the new high mega pixel is you loose the low light ability.  I know Nikon is pushing it works till 6400 ISO but the one thing Nikon has always excelled is low light.  Now most of us probably won’t need anything higher than that.  The camera weighs 100g less than my Nikon D700 which is a plus, but it almost a 1/2″ taller.  The last thing missing that would have been nice is the U1 and U2 settings found on the D7000 but not here for saving your own preset settings.  Overall this is a big announcement of a great camera.  At $3000 dollars it is priced well also.  With the D4 announced earlier Nikon has left the ball in Canon’s court for the 5D Mark III which I am sure we will see soon enough.

Here are two shots I took this past weekend on the Out of Chicago Photowalk: The Mag Mile at the River.  After taking this we all noticed Chris Smith taking panning shots of cabs.  So we all joined along, and then with the CTA buses passing a foot in front of us I took this shot: 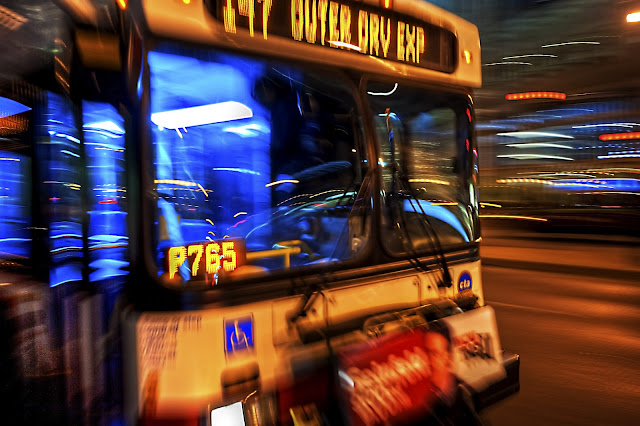 Now this shot reminds me of Joe McNally’s New York FireFighter’s shot!  Of course not as cool or thought out since he mounted his camera right to the fire engine and you can make out the driver.   I would love to pull this shot off from the driver’s side but that would involve me standing in the middle of street. Hmmmm, maybe.