This past Saturday, Chris Smith held his third Out of Chicago Photowalk.  We gathered out at the Adler Planetarium with hopes of capturing the supermoon that was present on Saturday night.

Here is the group, though about 10 minutes after this photo, most of the group scattered and there was probably only about 8 of us together through the end.  If you want to see Brian Koprowski’s group shot with me running, check out his blog here: Lost in Context. 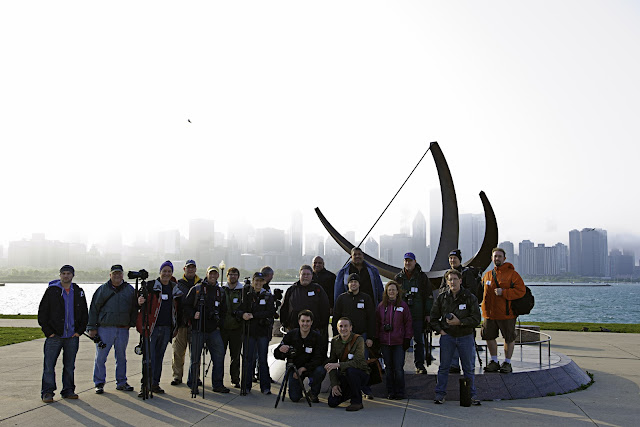 For those who do not know, the supermoon is when the moon is on it’s closest orbit to the earth and is a full moon, making it look very large when just over the horizon.  And as the guy outside of Hackney’s asked, it just did not happen only in Chicago on Saturday.

But some very persistent cloud cover kept us from getting a good view of it until it was well above the horizon, making it look like a normal full moon.  Chris was asking what he should say about this photowalk since he felt it was not as successful as his last two, but I the opposite because once again, it accomplished what it set to do.  Get photographers out meeting, socializing and learning from each other.

So I was unsuccessful at getting a clear shot at the moon because of course I did not bring along telephoto lens, I think the longest lens with me was an 85mm f1.4.   I had my normal client shoot gear.   But as always, I was most active during blue hour, and this is one good shot I got, which Brian and I both took, so I am very interested to see his, especially with the fisheye.  This is the Buckingham Fountain with reflections of the skyline in the puddles form the blowing fountain.  The skyline is covered with clouds and key buildings cannot be seen.  Adds to the mystery of the shot. One other shot I will share for today, preview on the blog, instead of posting on Flickr first.   This is of US41, known better to Chicagoans as Lake Shore Drive.  This road actually heads from Copper Harbor, Michigan where the last bit of it is a dirt road that just leads to a turn around in the UP to Miami, FL.   The clouds were sweet Saturday night and I have some other interesting shots of some of Chicago’s supertalls being wrapped by them.  But you can see the odd formations in this photo! 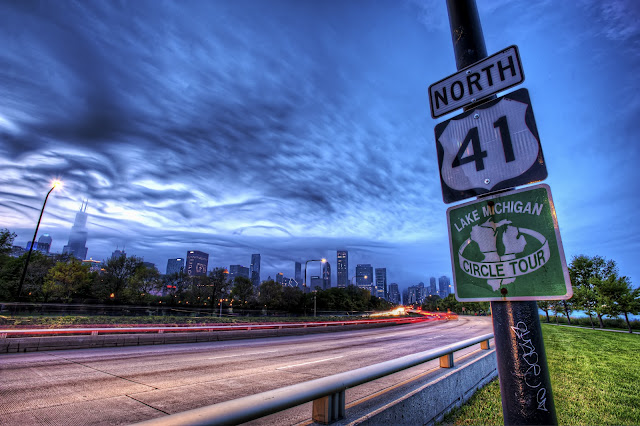 Had a blast Chris, and a suggestion to all who read this, participate in these photo walks, they are a great way to network, learn, and just hang out with people who love the same thing you do.  You learn a lot and meet some new friends!