Over the past couple days I had to take a business trip out to Portland, OR.  I had never been out there before so of course I brought my camera with me.  I only packed my D700, 17-35mm f2.8, and my trusty gorillapod, which there were only a few times I wanted a different lens.  My plan was to just find time around the reason I was out there to go snap a few shots at least, some proof I was there.

I was able to get downtown early before sunset and snap a few shots of the skyline.  There was a haze in the air but the skyline was fully visible.   There is a river path opposite the main part of downtown which was pretty popular for bikers and runners, this made a great spot for viewing the area. 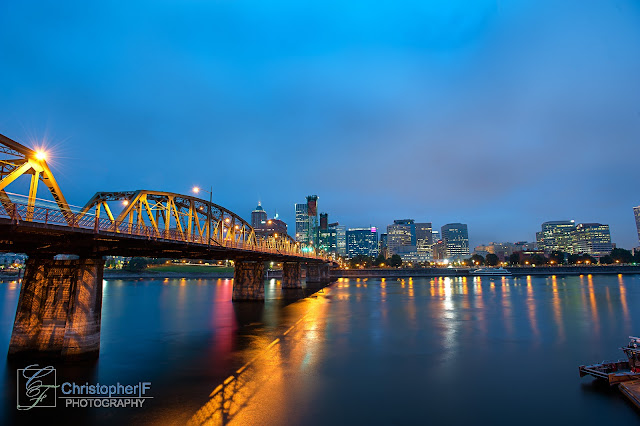 After our work meeting, my coworker and I decided to venture out towards Mount Hood, Oregon’s tallest mountain and a dormant stratovolcano. This area is about 50 miles southeast of Portland.  Upon making our descent up the scenic drive that loops around the mountain, we came across an overlook that gave an amazing view of the surrounding hills.  It was getting close to sunset so the light between the hills was stunning. 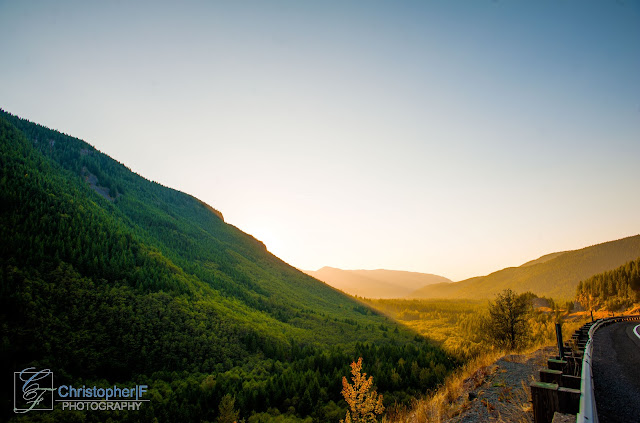 And in the other direction, Mount Hood peaked around the hillside for us.  Mt. Hood is covered by 12 named glaciers or snow fields that cover is peak area. 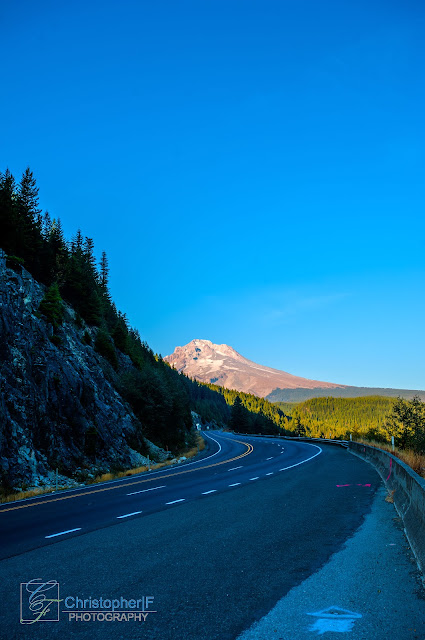 A little Dodge Charger rental car action.  Love that light in the background! 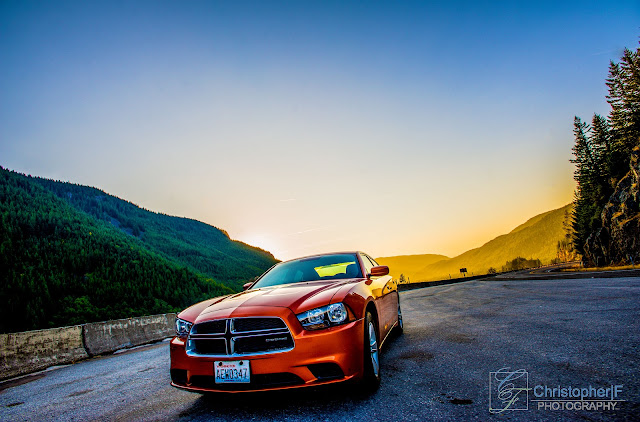 After circling around the Hood scenic byway you start your descent towards the town of  Hood River.  Along the way the river winds down near the road so we stopped a couple times before we lost our light to capture some beautiful Oregon nature.   I really wish we had more sunlight and time to hike out to the water falls, but the rushing streams and rivers were wonderful.  You forget how peaceful it is, especially when living in one of the largest metropolitan areas in the nation.  My coworker and I just relished in the sounds of the running river and took in the beautiful sights around us. 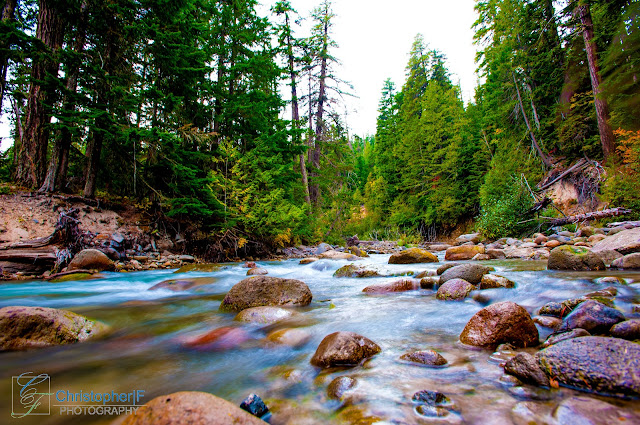 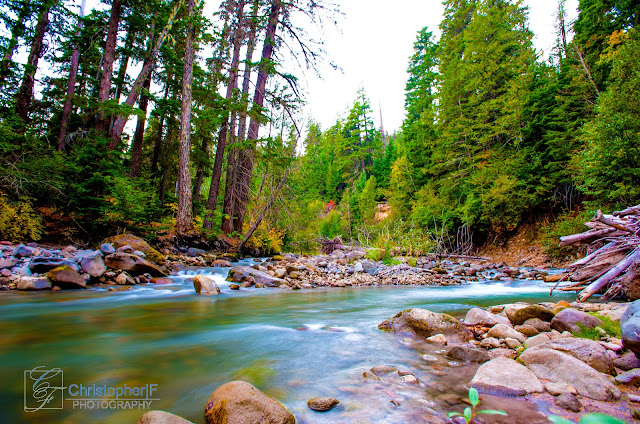 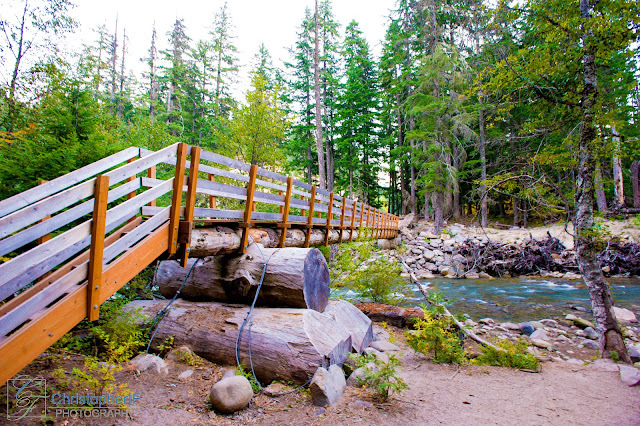 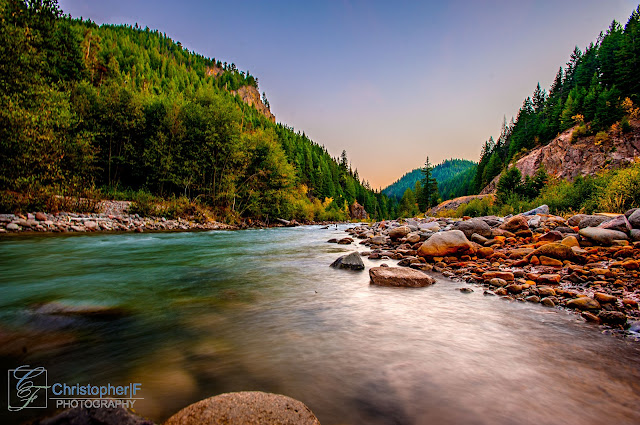 As we were leaving the National Forest, my worker noticed the majestic view in our rear view mirror, so we had to stop. 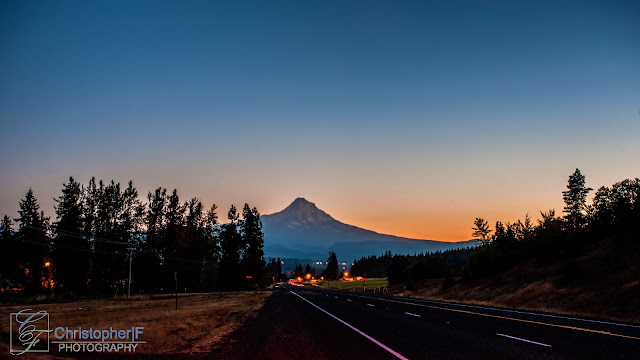 A shot of the Charger’s headlights with Mt Hood in the background.  I should really get Dodge to have me shoot their ads! 🙂 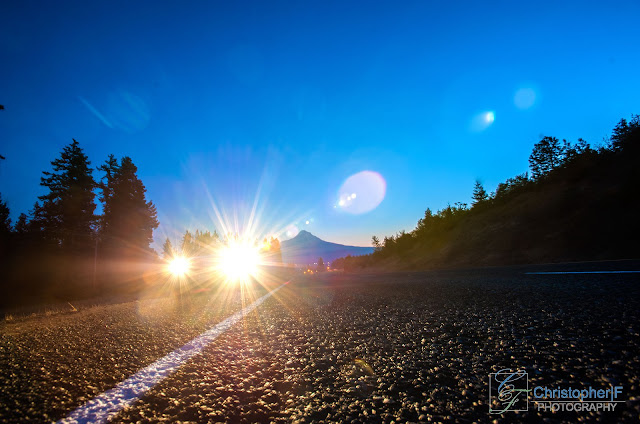 From there it was back to the hotel to fly out the next morning.  I had an early morning flight and sat on the right side of the plane which led to one more shot that I love.  Mt. Hood at sunrise:
(Maybe shoot both Dodge and Southwest ads!) 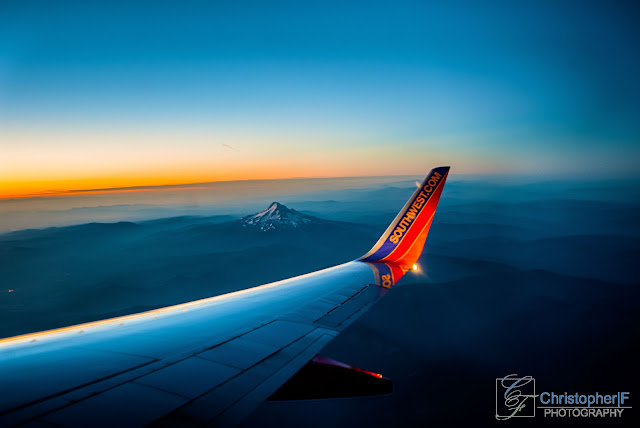 Photographer’s Note: (All of these images were processed with Photomatix’s new 32bit Lightroom Plugin.  If you do not have it, get it and use it.  The results are amazing.  If you don’t know what I am talking about send me a message and I will let you know!)