It is that time of the year again, the holidays are in full swing, lights are up in the neighborhoods, music stations have started their 24 hours of Christmas Songs, and the specials are on the TV.  It is also the time for sending Holiday/Christmas cards.   You can send the same old boring buy a pack of twenty at the store or go for a nice family photo but why not have some fun with it.

My wife and I decided to have some fun.  The concept was all my wife’s idea.  The execution was a learning process, the results we love.

We needed an idea, so my wife thought of out crazy pup (she is almost nine but I still call her a pup) and her playfulness.  Thinking Christmas lights and entwined in them.  With that in mind, the perfect place was obviously in the living room with our first Christmas Tree in our first year in our new home, perfect.

So there we had an idea, a place, now just needed to add some thing to it.  Jersey would be the focal point, us in the background, just needed something a little more.  Then my amazing wife thought of it, a sign that everyone would know the phrase from a popular Christmas movie.  (The phrase is actually from a fake sequel to a fake movie based on a real Humphrey Bogart film from 1938 called “Angels with Dirty Faces.”)  Know what it is yet?

With the full concept in place, while my wife was doing some other things I set-up and started testing lighting.  I would have ambient light from the Christmas Tree, a 5′ wreath above our TV above our fireplace, and the lights wrapped around Jersey, but I would need more.  I set-up two speedlights, one to light Jersey and the sign with a diffuser on the front, and one bare aimed at me and Colleen in the background.  This lit us well but the rest of the scene was dark.  I needed more ambient light.  I used a lamp behind the camera to add some light to the front of the scene and then two pot lights in the ceiling right above the fire place to at the last bit of light which was perfect to allow the Christmas lights to sparkle as well as light the scene as the room would normally look.

The last problem was how to get the dog to stay and look at the camera with Colleen and I behind her, we both knew she would turn around and stare at us “What are you crazy two humans doing to me?”  So I thought it would be best to composite two shots together.  We shot Colleen and I first then Jersey separately so we could get her to look at us and stay still.

I then took the photos into Lightroom to process the images and do some minor tweaking, then took it into Photoshop to layer the two images and make the final touches.  A 16×9 crop was chosen to get rid of the tv above the fireplace and to make sure we got everything across in. 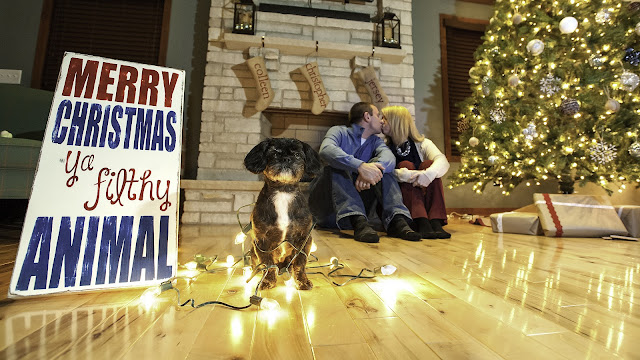 Final settings on the camera and flashes were:

Both Flashes were triggered through Nikon’s CLS system on TTL.

Happy Holidays Everyone!  I hope everyone has a little fun with their cards like we did.