As the years sessions are coming to an end, this is the time I want to pursue some personal projects.  After meeting the likes of Aaron and Chris at Phlearn (probably the bets photoshop tutorial site out there) and seeing the works of Stephen Wilkes Day to Night series of New York I have been inspired to create more projects on my own.  But this past Thursday was just for me to get out and shoot downtown Chicago again! I headed down and I had two ideas for shots, well two locations, and one I had an idea inspired by Stephen Wilkes project.

If you have not seen the Day to Night series, please check it out.  So I wanted to do my take on it, but if you have seen the video of his process, he takes images for roughly 15 hours for each shoot then takes details of many of those to piece these together.  For my first attempt I decided lets go with an hour.  So I headed to my location and set-up the shots.  The light was already starting to fade, so I do wish the first few images were more daylight, but I think it still works out well.  I shot well into blue hour and decided to do this as a two shot pano to get a good 16:9 ratio print.  In the end I used 4 main exposures to create the image.  These four images were roughly taken 15 minutes apart.  They were then processed through Lightroom and stitched together in Photoshop.  I then auto-aligned them since I was doing a pano my tripod did shake and move slightly during the process.  Then came the time consuming part of blending the images together.  I manually painted in each exposure working from “day” to “night”  making sure I got the one exposure with the two trains passing each other on the S-Curve in.   (Getting a Wacom Tablet soon and cannot wait since painting with the mouse can be a pain.)
Here is the resulting image: 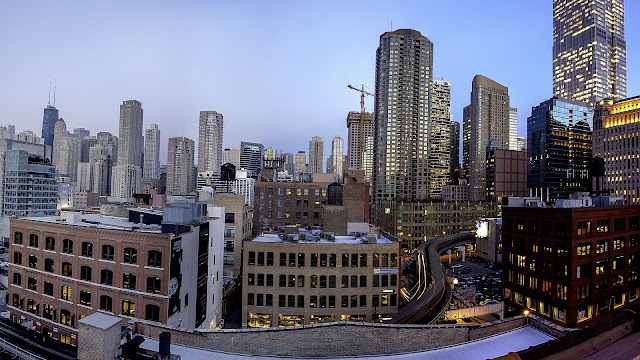 I cannot wait to try my next attempt at this, hopefully with some clouds to show the length of exposure better and catch more daylight exposures.